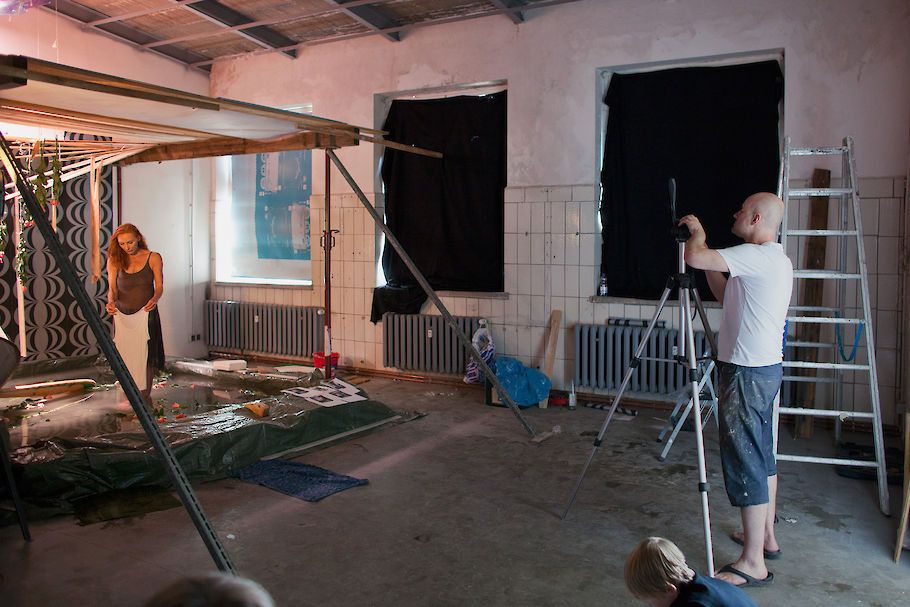 A short dialog Between actress Andrea Sawatzki and Germanist Dr. Tina Simon about the origin of the collaboration between an actress and a painter.

Simon: Do you have a special relationship to visual art? To modern art? To painting?

Sawatzki: I love almost every kind of art. In my youth I loved Picasso’s Blue Period. It consoled me. Later I preferred the more opulent works of Klimt, and then Schiele. Now I admire Richter, Rothko…and many others. I really felt accessibility to modern art during a gallery tour at the Leipzig Cotton Mill. That was an incredibly fulfilling experience for me and also led to the happy circumstance that we now own a real Kalaizis!
But I have always been impressed by the old masters as well. This has never been limited to one particular epoch. After many years in which my husband and I collected older works, we have been focusing more on modern art for some time now. In any case, I have always had a penchant for painting. Our youngest son Bruno is now proving to be truly talented and we hope to maintain and share his enthusiasm.

TS: How did the co-operation between yourself and Kalaizis come about – were you curious or skeptical?

AS: It was clear to me from the beginning that I would pose for Aris someday. His paintings are stunning and meanwhile we have become the proud owners of the painting “The Day of Great Hope” (2007). My husband Christian Berkel had already posed for another Kalaizis painting (“Past Presence Regained”, 2010). I agreed because I am a true admirer of his.

TS: How is it different when your “director” is a painter? Was it as you imagined it would be? Or was it completely different?

AS: No, it was exactly as I had imagined. After all, an actor depends on his imagination, on inventing his own story. That’s the way it was when I saw the phenomenal stage set Aris designed for “Homegrown” (2011). The fate of the woman I transformed into for this picture unveiled itself to me immediately before my eyes. I sensed what had happened without exactly knowing what it was. Of course, every viewer will interpret the work differently. But that is the precisely the attraction of Kalaizis‘ paintings. Aris tells stories in his paintings, involves you in the life of various human conflict situations, and in the end gives the viewer the freedom to find his own meaning.

TS: Were you prepared? Did the painter give you an insight into his visual construct? Or did you simply trust him?

...as an actress, nothing can shock me anyway

AS: Aris had sent me a photo of the set and I was drawn to it immediately and in a certain way I was also forewarned, because I understood that something terrible must have happened in the life of the main character. But still, you can keep spinning the story in your head and find a good ending for it. But I would have posed for Aris for any motif. As an actress, nothing can shock me anyway.

TS: It isn’t a portrait! As the main character in a work of art, you provide a highly charged character with your face and your appearance to create an unforeseeable story – and that possibly forever. Does that bother you?

AS: I loan my entire body, not only my face. I always do that as an actress. I have to develop a story together with the director, but I have to adapt to his visualization, his image and yet still remain aware and claim my own body language. And I like the fact that one can’t fast-forward me. Interpreting a work of visual art is left up to the viewer even more strongly than it is in the case of a film. Can you bear that?
That is the most exciting part. I don’t want to overload the viewer with my own ideas but rather want to remain transparent and incite imagination

TS: You endured patiently for a long time in sweltering heat. What were you thinking about the whole time?

AS: That I felt like continuing to act out the life of that woman. Before or just after that moment in time.

TS: Would you pose for other artists? Or is there something in Kalaizis’s work which “facilitated” your co-operation?

AS: I normally make myself scarce when confronted with such requests because I can’t rid myself of the fear that somebody might only want me because they feel they can currently market their work better that way. With Aris, I know that he means me, and I like the fact that he takes a long time to consider his paintings. He searched for a situation for me, for a woman who essentially appears like me and can possibly become one with me. That is a gift for me. And now I am a part of Aris’ visual world. 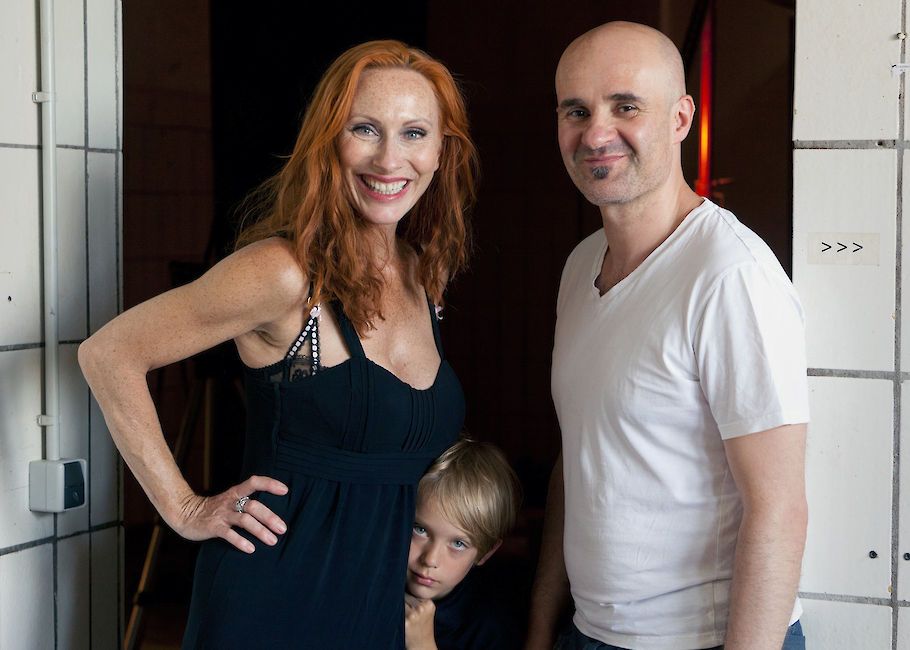 Andrea Sawatzki, born 1963, is a German actress and author. She became known to the greater public with her appearance in the 1997 film “The Pharmacist”. Furthermore, she has acted in several other successful films such as “The Experiment” and “Leo and Claire”. She is one of the most well-known German actresses. She lives in Berlin together with her husband Christian Berkel and their two children.