WHAT TO LOOK FOR: The Struggle Against Photographic Vision

Dr. phil. Tom Huhn teaches aesthetics and philosophy at the School of Visual Arts (NYC). In his essay he leads us the New Leipzig School - painter Aris Kalaizis into the break place between photograph and painting 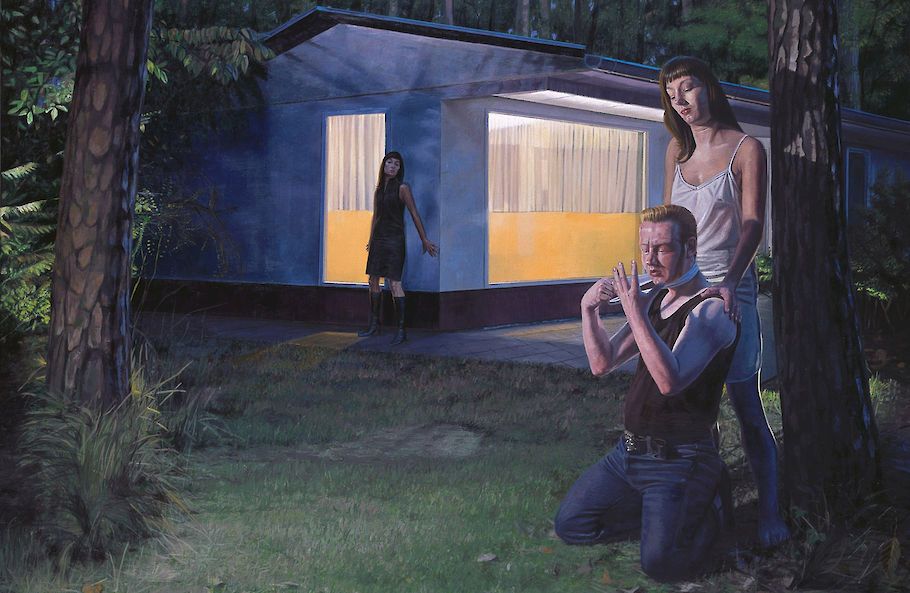 Leipzig painter Aris Kalaizis’ recent works push hard against the central unavoidable fact of our current visual life: the perplexity of trying to look at things and at the world with something other than photographic vision. Viewing these paintings we watch as this fact becomes the pervasive issue of Kalaizis’ work, appearing at once in both their themes as well as across their surfaces. The paintings seem to imply that the medium of photography not only too often reduces the world to nothing but seeming information, it also, thereby, flattens experience to the overall look of the photograph.

But why might anyone, and in this case Kalaizis’ paintings, protest against photography? What is purportedly so dangerous about photographs; can’t we simply ignore them or even just pragmatically take whatever we find of use in them? One answer is that the premise of photography effects a backward, sweeping implication: because photos reproduce the world homogeneously and generically then the world that lends itself to such reproduction must already be homogeneous and generic.

Photos thus assault the thought that whatever there is to see must be a made, constructed thing, in other words, an image. Thus the photographic ‘image’ is a kind of oxymoron, for the photograph begins as a thing denying the artifactual nature of its image. This complaint is not simply that the hand of the painter, draughtsman, or engraver is absent from the photograph, or that the photographic apparatus somehow substitutes for this (or even that one objects to the look of the photograph), the objection is rather that this very absence somehow becomes the photographic prerequisite for the value of its purported image.

What the photograph offers, strictly speaking, is not an image at all, but an agglomeration of image-like components which, together, give the illusion of being an image. This is what Roland Barthes famously discovered and named the punctum of every photograph: the wound of its having had excised the possibility of being a true image. Still, what makes nearly every photograph compelling is just this ventriloquist’s illusion. Like the dummy on the lap of something real, photos seem to speak – imagistically even -- but the origin of that which allows them to appear so real to us always lies elsewhere, away from us and unrecoverable. Photos are thereby at once uncanny but nearly always banal.

Kalaizis’ paintings work most insistently on and against just these two elements of photographic images: the uncanny, or, that which seems so insistently meaningful, and, the banal, or that whose meaning seems so flatly obvious. Nearly any of the most recent paintings can serve as demonstration. Pentagrass (2006) will work just fine. The waxiness of the Hazmat suits worn by the three figures is an allusion to the fate of flesh under the regime of the camera whereby flesh takes on the promise of a viscosity, sheen, and a ready yieldingness (has flesh ever promised so much as when it appears in a photograph?).
But this waxiness cuts at least two ways: one is toward the illusion of preserved lifelikeness in the flesh of waxed fruit. The other is toward the waxy appearance of the flesh of human corpses. The device of the Hazmat suit allows Kalaizis to emphasize what is elsewhere a far more subtle appearance of waxy flesh in many of his other paintings, for example, the two pair of Nike and Psemata paintings. Pentagrass’s left foreground – from which the perspective of the painting proceeds -- contains the chalk outline of a murder victim. Note how one of the Hazmat figures has a foot on the head of the outlined victim, as if to signal a disregard for and complicity in the destruction of the drawn figure. The hose, appearing from the left and encircling the three figures like the serpent of the Laocoon group, enters the painting by decapitating the chalk figure. The hose also functions as a narrative of figuration and photography, for the figures themselves alternately struggle with and against it. The hose might also represent the continuity of the tradition of drawn and painted figures – no wonder the hose must be treated photographically as itself something toxic. Alternately, the hose might carry the antidote to that tradition, or, perhaps it is being dragged, however reluctantly, into the new tradition that is photography. In sum, given the chalk outline of a corpse (though even the corpse is absent), whatever necessitates the Hazmat suits, the deathly-flesh appearance of those same suits, the allusion to the Laocoon group, etc. we might say that the deathliness of the photographic image is here precisely overdetermined. The question to ask then is what life, kind of life, or even lively impulse makes these appearances of death so pressing. That is, and to put it psychoanalytically, how should we characterize whatever the life impulse is that struggles so unremittingly against the multiplicity of deathliness in this painting?

We could go after Kalaizis’ encounter with photographic vision another way: by way of the gap or fissure that seems to structure each of his paintings. One overarching gap is the lacuna that exists in each of the painting’s narratives. The gaps yawn on both sides of the events depicted: in Pentagrass the moment depicted leads someplace utterly unpredictable and, importantly, unforeseeable. But so too does the momentary image of the painting arrive from someplace inexplicable and rather unimaginable. It is not so much that the painting alludes to a break in the narrative of which it is a vital moment, as it is rather that the painting gives a narrative charge, an illusion of narrative, without any of the integration necessary to compose a narrative. One might best describe this effect as “narrative-like”. We could say that each painting partakes of the “as if” quality, each could function as if narratively, though strangely without any element that would have the narrative congeal. In just this way Kalaizis’ paintings mimic – but to an extreme that no single photograph could achieve – the conviction of the reality of the narrative seemingly apparent in every photo.

The painting titled Bahren (2007) offers an example of this sphinx-like narrative riddle: what possibly could have prompted the arrival of the semi-nude woman knee-deep in a pool of water illuminated by auto headlights; and so too, what might next happen? The narrative fissure within each of Kalaizis’ recent paintings might also be acknowledged in the realization that it is impossible to discern whether the compelling event has just occurred or is instead just about to occur. The sadness, indeed the mournful quality of these paintings, is recognition of their inability to succeed narratively.

A painting such as Deafcon No. 1 (2006) even makes light of this photographic absence of narrative content in the midst of a substantive narrative conviction: here the self-portrait figure illuminates a wall fully blank with meaning. The figure leans forward toward the wall expecting to find some mark that might redeem his conviction.

And yet the three doorways of the painting imply that the viewer is more likely to find a way through the wall than encounter some meaningful mark. Such a mark (nonphotographic!) would – precisely by thwarting our forward progress through the implied transparency of the wall – instead productively confound us. So too in The Allies (2007) does the self-portrait figure again have hold of a light fixture, but in this case the painter tilts it directly into his face.

Peering into the light here shows that light itself is to be interrogated – perhaps for its complicity with photography -- rather than taken for granted or used as the means by which some meaning might be brought into existence. It is as if the light holds some secret of its own meaningfulness, of how it is able to illuminate and bring meaning.

Tom Huhn, Ph.D. in philosophy , was born in 1957, and is the chair of the Art History Department and BFA Visual and Critical Studies Department at the School of Visual Arts. He is the author of "Imitation and Society: The Percistance of Mimesis in the aesthetics of burke, Hogarth and Kant" (2004) among other publications. Huhn lives in New York City.