In a first approach examines the in Cologne living and to Lacan and Freud practising psychoanalyst Fotini Ladaki the paintings of Leipzig painter Aris Kalaizis under the aspect of a won back mysticism. Furthermore she describes the integrations necessary for it of the upper world and underworld. 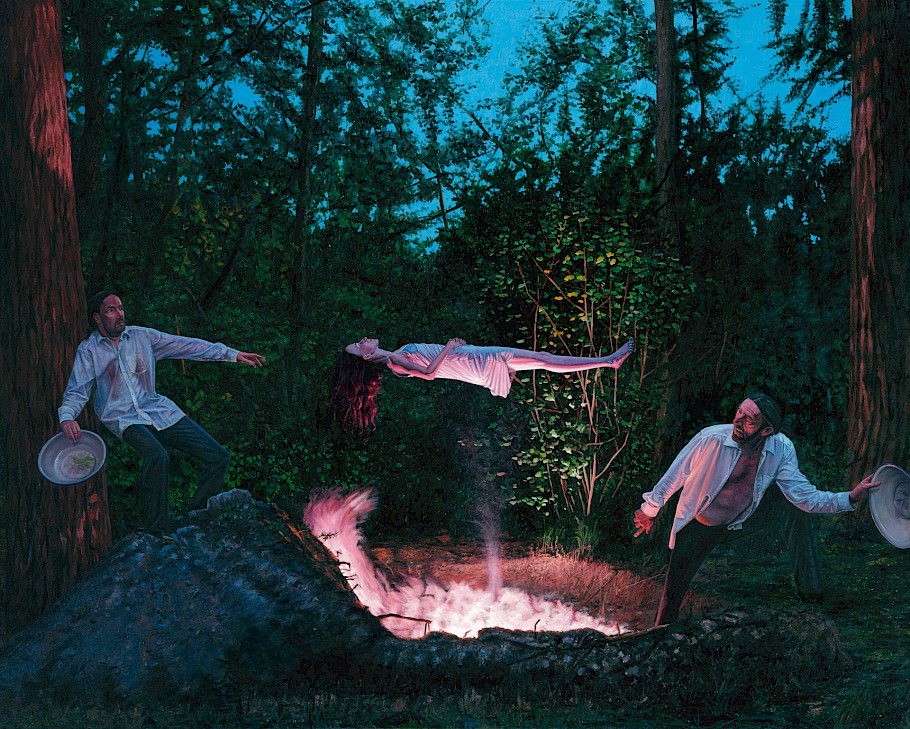 Aris Kalaizis’s paintings appear dreamlike and mystical, akin to a synthesis of several worlds: subterranean and not of this world. The avowal from Virgil’s Aeneid “Flectere si nequeo superos, Acheronta movebo” (“If I cannot bend the gods above [the upperworld], I shall raise hell below [the underworld]”) springs to mind – which, incidentally, also appears on the title page of Freud’s The Interpretation of Dreams. For art, a message like this can never be too mystical. It seems to orbit the spirit of art as a source of inspiration or an epiphany, as defined by James Joyce in the aesthetic theory summing up his own writing. For it is this message alone which can capture the interdependencies between the upperworld and the underworld beyond all the homilies and laws of religion. This is why "New Leipzig-School"-painter Aris Kalaizis work was described by art historian Carol Strickland as sottorealism. Sotto is the Italian word for ‘beneath’ or ‘under’ while realis is Latin for ‘concerning the thing’. Yet the ‘thing’ plays an important part in Heidegger’s philosophy and also Jacques Lacan’s psychoanalytical theory. Lacan attributes the thing to the ‘real’. However, the ‘real’ should not be equated with reality, which is merely the ordered section of the ‘real’. Instead, the ‘real’ is part of the topology of Lacan’s Borromean knot (RSI = the real, the symbolic, the imaginary) – a figure he uses to define the psychic structure of the speaking subject. According to Lacan, the ‘thing’ makes a ‘hole in the real’. Lacan regards the ‘real’ as something incomprehensible and indescribable which resists the imagination and symbolization, and to which dream, trauma, chaos or horror are attributed. Moreover, the body (rather than the idea of an image of the body) is part of the real.

The whole progress of the subject is then oriented around the Ding as Fremde [‘thing’ as ‘alien’], strange and even hostile on occasion, or in any case the first outside. It is clearly a probing form of progress that seeks points of reference, but with relation to what? – with the world of desires. (1)

What do Aris Kalaizis’s paintings show? The underworld of the upperworld – or the upperworld which hypothetically is still in the clutches of a hallucinogenic underworld? This can be associated with the sentence from Karl Schlögel’s book In space we read time. But what time and what space are we dealing with?

What about the space which presents itself like an open book and yet appears inherently apocryphal? First of all, it is apparent that this can only be a poetic space. After all, when the huge stump of a chopped-down tree complete with its roots, twisted and torn, suddenly appears inside a normal living room, what sort of dreamlike vision is this? Where have this stump and its roots come from? The image puts us in mind of our own roots, our family tree, the history of our development, our extraction, our origin, perhaps also concepts like home and homeland. In an era of mass migration, it’s like an overarching, floating symbol.
Are the objects selected and depicted placeholders for signifiers? Signifiers is the term used by Lacan to refer to those signified linguistic elements which are intended to represent a subject for another signifier. Art is always dependent on achieving “a triumph of the gaze over the eye”, a quote from Lacan’s Seminar XI borrowed by Slavoj Žižek in his psychoanalysis of Alfred Hitchcock:

The transfixed gaze isolates a stain of the Real, a detail which ‘sticks out’ from the frame of symbolic reality – in short, a traumatic surplus of the Real over the Symbolic; yet the crucial feature of these scenes is that this detail has no substance in itself – it is, so to speak, ‘substantiated’, caused, created, by the transfixed gaze itself. The objet petit a of the scene is therefore the gaze itself…(2)

Aris Kalaizis’s working process (staging a non-existent world, capturing it in photographs, and finally transferring it to the canvas) resembles an optical illusion, albeit not in the traditional sense. He arranges in space a world of real objects which, although taken from reality, acquire the character (according to Lacan) in this arranged space of a non-existent, eerie ‘real’.

One striking feature is the recurrence of the number three. Three steps, three stages of a complex working process

Since every artist proceeds demiurgically and produces a creatio ex nihilo, Kalaizis likewise produces an aesthetic space. When he does so in the process of creation, this is reminiscent of a transgression, of crossing a desert – perhaps the ‘Desert of the Real’, to borrow the title of another book by Slavoj Žižek?
One striking feature is the recurrence of the number three. Three steps, three stages of a complex working process, three levels: staging, capturing and transferring. Is this a deliberate parallel of a trinity – or a triptych? In his theory of beauty, Thomas Aquinas also spoke of three strict stages of a dialectic: perfection, harmony and clarity (integritas, consonantia, claritas). And in Ulysses, which is based on Homer’s epic poem Odyssey, James Joyce imagines another trinity: paralysis, gnomon and simony.

His soul, his essence, suddenly dissolves before our eyes from the envelope of its appearance. The soul of the most common thing, the structure of which is outlined in this way, begins to shine in our eyes, and now the thing undergoes its epiphany. What does that mean? That this phenomenon means the same for things as death for mankind: the instant of paralysis, the moment of truth. Being the height of art, the epiphany reveals the hidden reality of the world and simultaneously reduces it to its pure essence. (3)

But surely Aris Kalaizis could paint anything he’d thought up? Why does he require this elaborate process? Are these arrangements in the real world supposed to prove that the scene shown could actually be reality? Is he creating a space delirium which claims to be more real than reality itself?

The appearance of the real in the presence of the grotesque

If we understand Joyce’s concept of epiphany to be fundamental to the production of a work, this begs the question of what permeates the work epiphanically. On the one hand, Aris Kalaizis’s scenic arrangements suggest crossing the desert of the real. A hyper-metaphor of the demiurgical seems to be circling above the elaborate work process. God created the world in seven days. Not for nothing does Joyce replace God with art. As soon as God had told Adam to name the things and the animals, the things were mortified. The name as a symbol means the death of the thing, says Lacan. This also reminds us of the presence of the grotesque in paintings by for instance Hieronymus Bosch, Bruegel and Gallot. In literature, Kayser assigns the works of Goethe, Lenz, Büchner, Victor Hugo, Jean Paul, E.A. Poe, E.T.A. Hoffmann, Kafka and so on to the grotesque. And he adds playwrights like Wedekind and Schnitzler to the list. In his book The Grotesque in Art and Literature, Wolfgang Kayser writes as follows: “Friedrich Schlegel tries not only to situate the grotesque in the context of aesthetic concepts such as the naive, the comical and the sublime, but also to connect it to modern-day chaos theories.” The explanation shortly afterwards is very reminiscent of Lacan’s ‘the real’: “Kayser’s double thesis that the grotesque refers to the unavailable, the incomprehensible and unportrayable….” Ornamentation and the miniature also come into play. Isn’t this also the nature of the real?
The lengths to which Aris Kalaizis goes in the trinity of his creative process are evocative of a return to the real. Whether a homecoming is also involved as in the hyper-metaphor of Homer’s Odyssey is uncertain, although this is an aspect indicated by the painting featuring a (family) tree. He ventures to create this space and enter it in the imagination. But before it disappears, he captures it photographically, creating evidence that the subsequently non-existent scene did indeed once exist.
If these theoretical assumptions are to explain something about Aris Kalaizis’s work, we need to examine whether, through his style, he constitutes both unportrayable reality and this part of the grotesque in the twenty-first century. 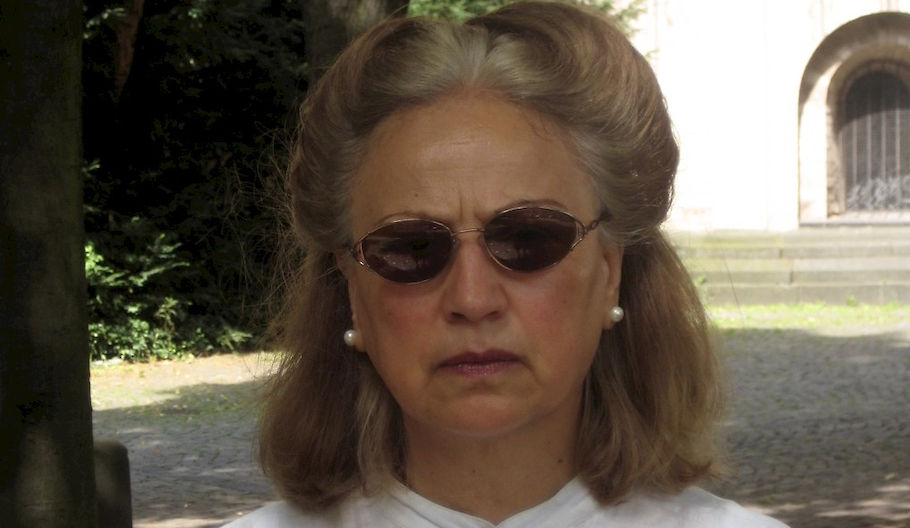 Fotini Ladaki, born in 1952 in north Greek land, is a psychoanalyst (to Lacan and Freud) and works in her practise in Cologne. In addition, she works as a free author. Thus she written beside many essays about art and psychoanalysis, stage plays, stories and lyric also an essay about Gerhard Richter„ Moritz“. About the fright of the existence experience or possibly„ Freud came to Parla-Dora“. Their other publications are to be found under the following web page: www.praxisfls.de