In Stefanie Heese's dissertation examines the effect of works of art on the understanding of literary texts, using the example of the early painting "Ocean" (2004). She describes the interaction between dreams and reality. 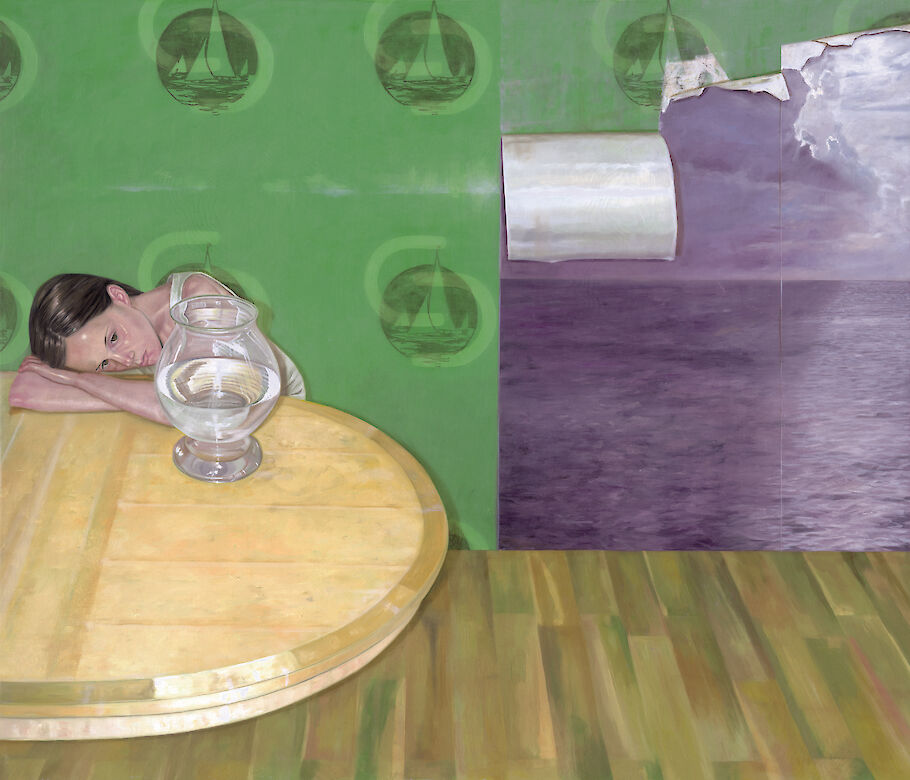 Aris Kalaizis was born in Leipzig in 1966 as the son of Greek political emigrants and studied painting at the Leipzig Academy of Visual Arts under Prof. Arno Rink. He currently lives and works with small interruptions in Leipzig. Like German Painter Tim Eitel, Kalaizis belongs to the “New Leipzig School” .

His art is characterized by an "aura of formal clarity, increasing stillness, but also remoteness" (Schlueter 2005, p.9). If Tim Eitel was ascribed surreal features in his paintings, this attribution also applies to the paintings of Aris Kalaizis.

The painting Ocean deals with the ambivalence of dream and reality. A girl with long brown hair and wearing only a white shirt is sitting at an oval, light-colored wooden table. Her head rests on her crossed arms and her gaze is fixed on a vase half filled with water.

Facial expressions and gestures indicate that she is lost in thought and does not perceive her immediate surroundings at all.
She is very pale, and her translucent glossy skin, narrow face, and prominent bones make her appear extremely thin and ill. This impression is reinforced by the looming rings under the eyes.

The design of the interior is only indicated by the table. The room looks empty and tidy.
The nature of the wall behind the girl is essential for the interpretation. A striking grass-green wallpaper with large symmetrically printed circles containing a group of sailing boats covers half of the wall visible in the painting.

However, this wallpaper seems to have been partly pasted over with a sea motif wallpaper. However, the panels of this carelessly applied wallpaper are coming loose and the detached corners are hanging down. At the top of the painting, the green wallpaper comes to light again.

Despite this sloping wallpaper, the interior does not appear shabby or dilapidated, but rather neat and well-kept.

What is striking is the realistic representation of the sea, which stands in stark contrast to the ornamentally designed green wallpaper. Apart from the impossibility of directing one's gaze to a sea at this point and in this way, only the gap between the wallpaper strips that meet shows that it cannot be a sea, but only shows the depiction of it.

The picture suggests that the desire of wideness, perhaps also for adventure, can be so strong that on the one hand it makes you ill because it seems unattainable and on the other hand it is so strong that reality and dreams merge. If it is not the desire for space that makes you ill, but an otherwise serious problem, the following interpretation can be formulated: People are able to indulge in dreams in problematic situations, to leave reality with pleasure and to close themselves off from reality .

Another interpretation arises when the focus is on the sick-looking girl, who may already be dealing with death and imagining infinity.

You can detach yourself from the here and now through fantasies and dreams, but this ability does not represent an alternative to reality, but reality catches up with everyone again. A dream cannot be sustained. Illness and despair cannot really be overcome by this. According to this, fantasies are only a fragile help for overcoming real problems and allow only a short pause before reality catches up with the person concerned again.

Stefanie Heese was born in Potsdam in 1978. She is a trained high school teacher with the subject combination German and art and received her doctorate in May 2021 on the use of art works for literary text comprehension in the classroom. She is currently working as a teacher for special tasks at the University of Leipzig/ Department of Didactics for German Language and Literature.

She lives and works in Leipzig.