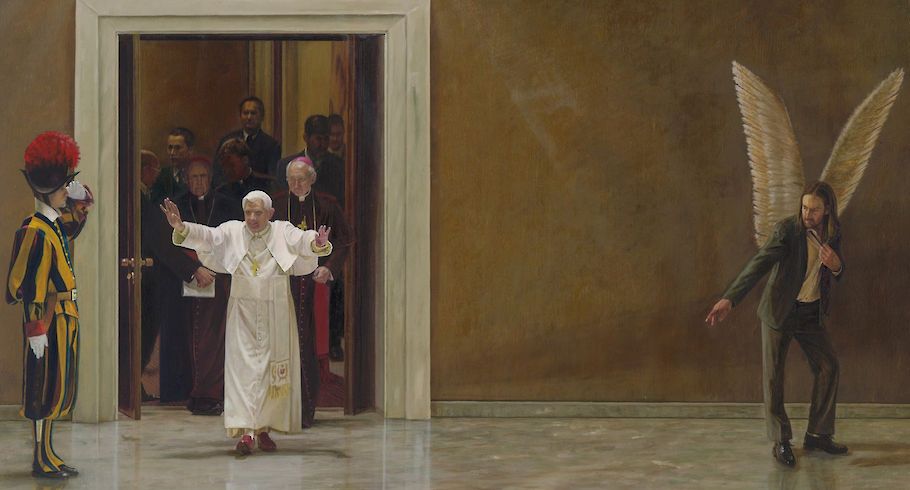 Mrs. Prof. Regina Radlbeck-Ossmann is teaching systematical theology. In her essay she approaches the compact painting of Leipzig painter Aris Kalaizis "make/believe" from 2012. In the face of the angel she recognizes scepticism towards the German pope Benedikt. This painting is still far from every stigmatization. Hence, she demands the viewer to become active independently.

The doors of the audience hall are open. A figure dressed in white whom insiders would be able to recognize the current Pope, Benedict XVI, walks through the door. The Pope approaches an imaginary audience; his raised arms are extended wide in a gesture of greeting. He is followed by two cardinals of advanced age, a somewhat younger secretary, and several body guards. The Swiss Guardsman salutes; the lightning storm of photographic flashes is about to begin.

The scene appears quite familiar, but is in fact rather unreal. After all, the viewer is not looking at a screen or at a magazine, but at a work of art. The appearance of the pope is positioned in the left half of the painting and thus creates a contrasting image opposite to him on the right. This area shows a young man in a rather rumpled suit, who would appear to be almost commonplace, were it not for the two wings which extend up high out of his back. By now the viewer’s gaze falters and his eyes begin to wander back and forth between the two main figures.

The contrast between the two figures could not be greater. A church dignitary is placed next to an unknown person; we find the leader of a group next to a sole individual, a bright figure next to a dark one, and an old man next to a young man. His outward appearance shows that he intends to make his own way outside of conventional social norms. With his long hair parted in the middle and his beard, he would be able to pose for a painting of Jesus as painted by the people of Nazareth. – However, this is not a gentle Jesus! His face reflects disapproval; his body is slightly twisted and turned away, as if he intends to exit the scene out of protest. His right hand with an outstretched index finger points toward the ground. With his left hand the young man is undoing the knot of his tie, as if he were gasping for air as a result of what he is observing.

There they stand, opposite each other: the Pope, completely concentrated on the perception of his representational duties, and the critical angel who rejects all outward appearances. Such a contrast is not new. The reference to Jesus as an enduring benchmark forms part of the church’s core self-image, and criticism of the media-friendly orchestration of pontifical appearances has often been expressed.

...is more than just a work that is critical of the church

However, this painting, which Aris Kalaizis, the son of Greek immigrants born in Leipzig, has created, is more than just a work that is critical of the church. It resounds with the statements mentioned above, yet it refrains from providing one single, simple, and universally known answer, attesting to the irreconcilable opposition of office and charisma and plays the media-friendly orchestration (MAKE) against piety (BELIEVE). Kalaizis provides both of these figures with light from above, the Pope as well as his winged adversary. The white cassock of the church dignitary even seems to capture more of it than the earth-toned suit of the Jesus figure.

However, does this light really give the scene a sense of balance? Is this light, which shines through an opening in the ceiling, a symbol for the presence of God, or is it itself part of a media orchestration? And why is the Swiss Guardsman saluting with his left, rather than his right arm? Is MAKE BELIEVE indeed an orchestrated event, intended to trick people?

Kalaizis provides no definitive answers. He asks the viewer to seek these answers for himself without taking any shortcuts that lead to easy solutions. That is why we can find such a myriad of nuanced shades! – The fascination which emanates from this image grows out of these nuances. Just as one believes one has understood this work, the impression turns yet again. One’s own interpretation begins anew to oscillate between MAKE,BELIEVE and MAKE/BELIEVE and one hesitates before forming an ultimate answer so that one can consider it all once again.

Prof. Regina Radlbeck Ossmann, born 1958 in Schwandorf (Bayern) has a chair for Systematical Theology at the Martin-Luther-Universität Halle-Wittenberg (Germany). She is living and working in Halle and Schwandorf.