His Figures and Faces seemed to be Alive 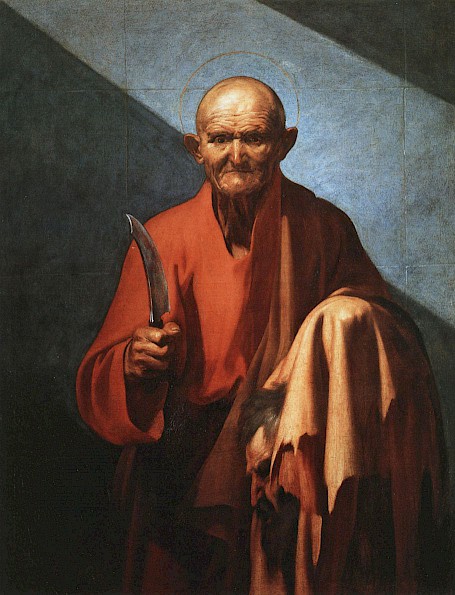 Prof. Dr. Michael Haensel from the university of Leipzig describes at the example of baroque painters like Ribera and Velazquez up to contemporary painters of "New Leipzig School" like Neo Rauch and Aris Kalaizis, the role of the craft in the painting 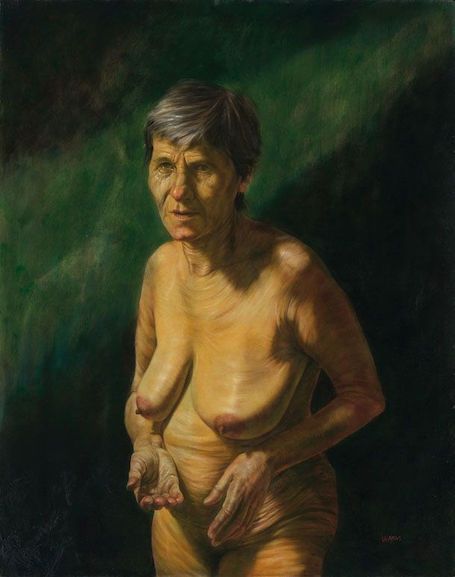 Using those words above, Francisco Pacheco (1564-1654) sought to characterize the way Jusepe de Ribera worked. In his tract on painting, Arte de la pintura (1649), Pacheco discussed Ribera in one breath with Caravaggio and Diego Velázquez. And there are contemporary commentators who believe that craft played a greater role in Spanish baroque painting than has been commonly acknowledged. The intentionally unfinished Apostles, displayed at the Museo del Greco in Toledo, show the bravura brushwork of the master. No one could figure out Caravaggio's ability of bringing out the delicate nuances of brightness and darkness without engaging a concrete light source. The Macchiaioli style employed by Diego Velázquez not only inspired Francisco de Goya, but also the Impressionists. And, some say, Jusepe de Ribera allegedly created a strange aesthetic theory called naturalism before its time without consulting a textbook and only by working with his painting tools.

What's so bad about craft? Isn’t craftsmanship the precondition of all good art? The New Leipzig School of Painting, or ›Neue Leipziger Schule‹, brought this debate back into the scene. One of the most prominent sociologists, Richard Sennett, even believes the new recognition of craftsmanship is a certain utopic notion, for “when the mind is disengaged from the hand, it ultimately leads to the detriment of the mind.« Driven by the desire for upward social mobility and especially for an adequate compensation, the Italian artists of the early Renaissance developed the technique of perspective and also tried to gain affluence as critics by attempting aesthetic theory. The academies affirmed their aspirations even though the avant-garde tried once again to get rid of theoretical speculation. Nevertheless, the modern painters of today have held on to the primacy of the artist as an intellectual. Craftsmanship, therefore, seems to be an undervalued category in our headstrong, brainy era.

Aris Kalaizis, like Neo Rauch, a ›Meisterschüler‹ of Arno Rink at the prestigious Leipzig Academy of Visual Arts, has elected the Spanish baroque painters to be his point of departure. In many interviews, he openly confesses the admirations for his paragons El Greco, Ribera, Velázquez.
There is even a painting by Kalaizis (»Feldversuch eins«│»Field Experiment One« 2003) that cites Ribera's »Matrimonio Místico de Santa Catalina« (1648, Metropolitan Museum of Art New York). One of the first paintings by Aris Kalaizis is a full-figure portrait of his mother in the style of the old masters and is clearly inspired by the Spanish spirit: Ribera's scrupulous overhead view on a green background.

The Praxis of Gradualness

»Fa presto« (»Rush!«) was the nickname of Luca Giordano (1632-1705), but most Baroque artists took their time when creating their paintings. The works by El Greco that the German Expressionists liked so much were the fruits of many steps in the working process and are, therefore, still in a much better condition today than the much younger paintings by the avant-gardists who referred to El Greco in 1912.
New research shows that »Meninas« (1656) by Velázquez is in no way a snapshot, as Carl Justi still believed, but was instead created over a number of years with a significant conceptual reorientation half way through the project. This is also true in the case of Ribera's »Last Supper« (1651). The first-generation members of Worpswede, the most well-known artists' colony around 1900, also took their time with their paintings, even though their works were made to be sold. Their ateliers produced only about ten oil paintings – but quite a number drawings and oil studies – per year.

Aris Kalaizis, too, cultivates the praxis of gradualness. Like Picasso, he happens upon his paintings rather than seeking them out. He strives to arrive at a Buddhist-type of emptiness, which brings about the necessary receptivity of the new, before he embarks on his projects. Consequently, he always only has one single painting in his atelier and nothing else that may disturb the centeredness of his imagination. He usually brings in actors, lighting technicians, and other helpers in order to reconstruct his inner image in a tableau vivant. Based on photographic images that result from those sessions, he slowly structures and crafts the actual oil painting in multiple working steps. One modern element in his work, of course, is his combination of painting techniques (such as varnishing and pastos) within one painting. 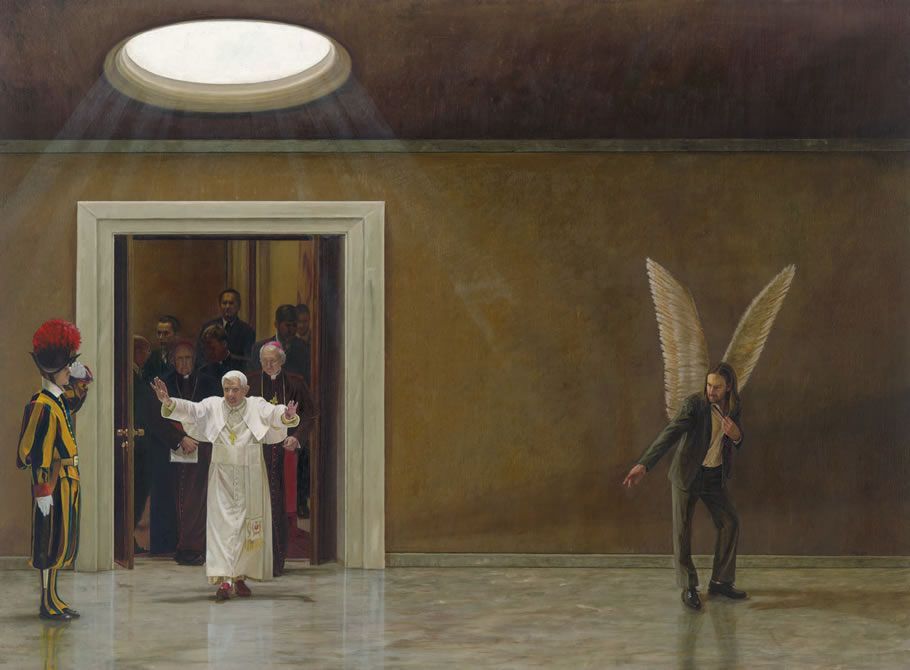 Of Ambiguity and Vision

A novelty in Baroque painting was the intentional construction of ambiguity in what was being depicted, intended to activate the beholders’ autonomy and allow for varying readings of the painting. Those alternative interpretations stood in stark opposition to what the Roman Catholic Church had declared to be doctrine after the Council of Trent (1545-1563), namely to create clear and definitive depictions that could be unequivocally understood by the flock. This, of course, led to a number of conflicts. The 16th century offered new opportunities with the rise of private collections and art work that was geared towards them. This allowed painters such as Caravaggio to sell their work, in some cases even twice: once to a collector, and a second painting to the original institution that had commissioned, but rejected, the initial piece, which was only seemingly consistent with »decoro«.

Another Leipzig-based painter was commissioned to paint a portrait of Pope Benedict XVI, had one work rejected, and sold the second version to the Church. Aris Kalaizis also painted the pontiff in »make-believe« (2009), but refused to paint multiple version of that painting, even though he could have sold many more. As in El Greco’s famous »Portrait of the Grand Inquisitor«, in which the subject is depicted wearing one of the most fashionable eyeglasses of the time, Kalaizis refuses to help us to make sense of his own painting or to interpret it.

The angel in the painting of the former pontiff also has something real about him. It is not soaring through the painting, but rather stands there and makes – paralleling the pope – a rhetorical gesture that seems to be beckoning for that which has been promised. Instead of pathos and ceremoniousness, he seems to be demanding action. The lighting in the Kalaizis painting is appropriately focused heavily on Benedict XVI. who is illuminated heavenly (i.e. medially), while his antithesis and opponent is unjustly standing in the darker portion of the painting. No painter of the 17th century could have gotten away with such a provocation.

Between the New and the Old

But now there is, indeed, something new in »make-believe« that lifts the painting invented by Aris Kalaizis far beyond the realm of Baroque painting and leads it beyond the parallels that we see in this or that movement. It is the element that makes his modernity. The painting unfolds an open-ended story in ambivalent forms. He tells this story in a space that is accessible to the beholder. That space is obviously constructed and invented.

The 17th century couldn’t operate like this, but we may find points of contact in the visionary photo productions of the North Americans Jeff Wall and Gregory Crewdson. Orchestrated or staged photography was developed during the 1970s in the circle of Cindy Sherman and Jeff Wall. In the case of Crewdson, whom Kalaizis knows well and admires, the medium of film, along with surrealistic lighting, later became an element in his work. The photo artist builds his pictures in an elaborate set in film studios and emphasizes the lighting directions. The American art historian, Carol Strickland, invented the term »Sottorealism«.
It describes generally what Jusepe de Ribera could have meant when he subsumed his art theory in brief terms with respect to the portrait »Magdalena Ventura« (1631). On a painted stone in a corner of the work, we read: »Jusepe de Ribera, Spaniard, distinguished by Christ's Crucifix, a new Apelles of his age, painted this picture in wonderful manner according to life on March 14th, in the year of the Lord 1631, at the request of Fernando II, third Duke of Alcalá, Viceroy of Napels.« In a »wonderful manner« implies that this isn’t some straightforward Realism, and is yet the opposite of an idealized cosmos of Raffael or Annibale Carracci. Ribera exercised a type of craftsmanship that reveals a lot of imagination (»Wunderbares«), while it is at the same time guided by nature's example and by the issues of its period. Applying this rationale, but perhaps without the protectorate of a mighty employer, we see the fallen angel in »make-believe«.

The parallels with photography and film, as well as the meaning of the chiaroscuro, have been discussed in numerous commentaries of the work of Aris Kalaizis. However, craftsmanship is something that differentiates Aris Kalaizis from Crewdson. Pictures, such as »Homegrown« (2011) show this very strikingly. Crewdson also has the scarcely-dressed women that are being haunted by the waters in cold moonlight, but turning to Kalaizis, we only realize that the woman is actually standing in water upon second glance.

The artist Ribera came from a family of shoemakers in Valencia and had to integrate into a Neapolitan society that was to him very foreign. Kalaizis is the child of Greek exiles, who in 1949 on account of the Greek civil war were sent to the German Democratic Republic (the DDR, East Germany). According to Paul-Henri Campbell, artistic truth requires experience in order to understand the art of Aris Kalaizis. Both artists, Ribera like Kalaizis, achieve that integration and gain energy from their work and their experience: being determines the consciousness. Richard Sennett argues in favor of giving the opus back its dignity by once again immersing ourselves in experience. He who cultivates skill and does his work for its own sake also has something to profound to say. And it is indeed so that the work of Aris Kalaizis challenges its audience with respect to form as well as to theory.

… I met Aris Kalaizis because he is interested in El Greco, and he was the first to inform me about a El Greco exhibition that was being planned in the Museum Kunstpalast in Düsseldorf, for which I then edited an art catalogue. It was a surprise for me to also find someone who is interested in Ribera as well, as I had been interested in him, too. Of course, the Spanish baroque painters are not his only influences, but they make up a solid basis and are a great topic of conversation while enjoying Rioja – which also tastes after a hard day's work.

Prof. Dr. Michael Scholz-Hänsel was born in 1955 and is professor for art history at the University of Leipzig. His research is concentrated on Ibero-American art. In addition to monographs on El Greco and Jusepe de Ribera, he published »Inquisition und Kunst ›Convivencia‹ in Zeiten der Intoleranz« (2009) and was co-editor of »Armut in der Kunst der Moderne« (2011) as well as »El Greco und die Moderne« (2012).