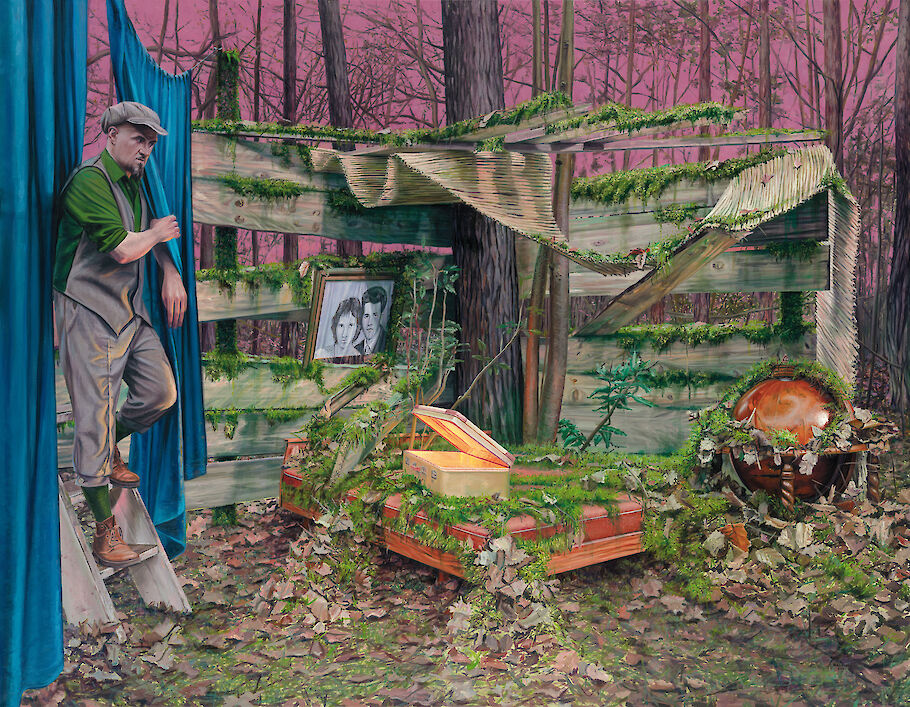 Based on the painting "Heimat" (2020) by Aris Kalaizis , the Cologne psychoanalyst Fotini Ladaki examines the concept of home. She refers to several historical events and looks for parallels in the life of the Kalaizis' family. Because the painter's parents lost their roots and their homeland during the Greek civil war of 1946-1949.

"The crows screech and fly whirring towards the city: soon it will snow, woe to those who have no home" (Friedrich Nietzsche)

"Being without a home means suffering (Fjodor Michailowitsch Dostojewski) 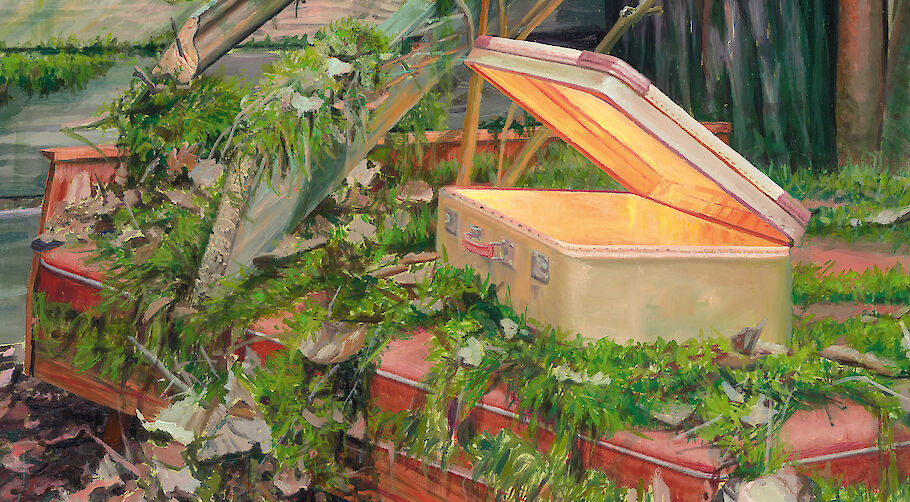 While the human – embodied in the painting by the artist himself – penetrates into the devastated homeland and observes the room with worried eyes, appearing externally and physically intact, he is caught up in a cloud of destruction. The following images are floating in this cloud: the portrait of the parents, an empty suitcase, an abandoned bed, tree leaves, a collapsed roof and a world globe. But unfortunately nothing can be seen on the world globe, neither countries nor continents or other home locations.

Homeland is by no means romanticized

The world has ended. In doing so, the artist Aris Kalaizis propagates a general loss that may not only have to do with a lost homeland, but also with the psychological consequences that usually follow such a dramatic event.

The painting is a thematically gripping painting because on the one hand it is of untimely relevance, on the other hand it is able to express a lot about the people of our time. One should not use one's homeland in a romanticized context. Millions of people are currently losing their homes. Refugees are always on the move.

They flee their homes and will probably never come back. This loss cannot be compensated psychologically with the proclamations from politics and economy, because world politics propagates reasons that have nothing to do with the qualities of the soul. Not for nothing did Franz Kafka say in his book "A Letter to the Father" that our world is a chorus of lies and deception.

Freud associated the concept of home as a signifier, after Lacan, with the secret and uncanny. In his essay on “The Uncanny” he writes: “...also homely, belonging to the home, not alien, familiar, tame, familiar and familiar, homely, belonging to the house, to the family ... from the native, domestic develops further the concept of the stranger's eyes, hidden, secret, also developed in several respects...
The German word 'unheimlich' is apparently the opposite of secret, domestic, familiar and the conclusion suggests itself that something is frightening because it is not known and familiar ...

The character of the uncanny can only come from the fact that the double is a formation belonging to the past spiritual primeval times, which at that time had a friendlier meaning. The doppelganger has become a nightmare, like the gods becoming demons after the fall of their religion.”

What happens when the nation or culture is lost? Has the Jew become the eternal scapegoat because, among other things, he embodies a constant loss of homeland?
Aristotle said in his work "de anima" that man thinks with his soul. There is historical and religious evidence for this. After 300 years of slavery in Egypt, the Israelites had lost both their language and their soul. Is the promised land also a hyper-metaphor for the lost soul? In Kabbalah, Jewish mysticism, it says that the soul is the throne of God.

In this respect, both the rebirth of the soul and language are discussed in the Old Testament with Genesis and the Exodus. However, this is done under the mantle of God. God personally takes responsibility for the Israelites and tries to give them back language and soul. On Mount Sinai he hands over the written tablets with the ten commandments to Moses.
The writing is also a symbol for the return of language. The ego, too, is a mystical sign for the lost language. And the food of the Israelites in the desert was called manna. It was the bread of heaven. In the everyday language of the Greeks, manna means mother. On Mount Sinai, God gave Moses the written tablet with the 10 commandments.

Even the Greeks were not allowed to use their own language during the three hundred years of Ottoman rule. They had to speak the language of the conquerors. There were the hidden schools (to krifo scholio) that were visited secretly at night.
In these schools one learned the letters and the grammar of the lost language. However, they were not allowed to be used for literature, religion and philosophy. They were silenced and mute.

When the Frankfurt Book Fair was dedicated to Greece 20 years ago, the FAZ reported that the Greeks had lost the skills of Homer, Socrates, Plato and Aristotle. But now they can dance and sing. If you have no language and no soul, you end up in the realm of Lacanian enjoyment. Freud would call it the realm of the pleasure principle. The true desire implied in all other realms such as narrative, philosophy, literature, poetry, even science was corrupted and also not allowed. How many years it will take a nation to find its lost soul and use it for desire is not yet known.

There is an economic and a spiritual exile

But National Socialism also caused the Germans to lose their old language and ethics as well as their soul. How else could you, as the mayor of a city, move into a Jewish villa with your family when the Jews had perished in the Holocaust. Holocaust means completely burned in Greek. So I'm moving into the house of the burned out. Only mice and rats can move into such a house, but never people who are aware of morals and ethics.

If you lose your homeland, you end up in exile. But there are certainly different exiles, as James Joyce notes:
"In exile we said, but it is important to distinguish here: there is an economic and a spiritual exile" (2)

James Joyce also sought spiritual salvation in exile in Trieste, because his homeland was threatened by political and religious attacks and restricted his creative freedom. But if one does not voluntarily lose one's homeland, like the Israelites and Greeks already mentioned, one falls into a different status. - Elias Canetti describes the condition with slavery. He says it turns you into an animal that has no language. These transformed animals or birds can only bark and caw.

"So the juridical definition of the slave as property and property is misleading. He is an animal and property. One can best compare the individual slave with a dog. The captured dog has been detached from its pack and isolated. He is under the orders of his master. He abandons his own enterprises so far as they go against these commands, and in return is fed by the Lord... Just as the Lord does not permit his dog to hunt what he pleases, but narrows the scope of that hunt according to his superior utility, so he also relieves the slave of one trained transformation after the other...

Like Zeus, art can give birth to its own Athena

From the beginning there must have been two different types of slaves: some tied alone like a domestic dog to a master, others together like flocks in the pasture... The desire to make men into animals is the strongest impetus for them Spread of slavery.” (3)
You are transformed into an animal under foreign rule, as Kafka often addresses in his stories such as "A Hunger Artist", "The Metamorphosis" or "Josefine, the Singer or the Folk of Mice".

“Our singer's name is Josefine. Anyone who has not heard them does not know the power of song.” (4)

In the story "Metamorphosis", the protagonist turns into a crawling animal, which stops using human language. But with his eyes he sees everything that happens around him. Under his father's dictatorial rule, Kafka was also unlikely to have a soul. But literature not only helped him, but also gave him a soul. Otherwise we wouldn't know anything about him. Literature and creativity belong, among other things, to the saviors of the soul, or help one to regain one's own soul. Just as Athena was once born from the head of Zeus, one can also give birth to one's own Athena through art.

Aris Kalaizis does the same with painting. With his art and the painting "Homeland" he addresses and brings to light parameters that may have also taken place in his biography. 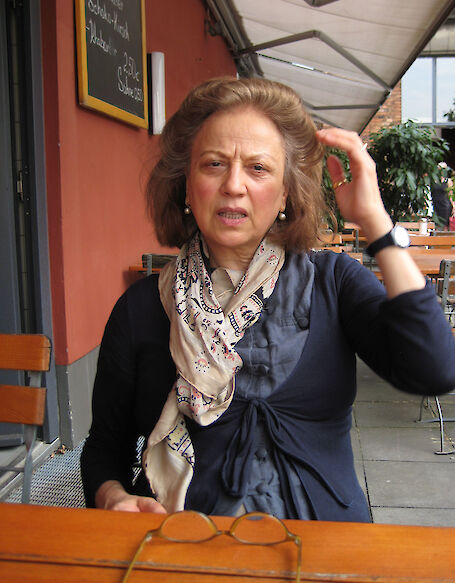 Fotini Ladaki was born in northern Greece in 1952. A psychoanalyst after Lacan and Freud, she works in her own practice in Cologne. She is also a freelance writer.

In addition to several essays on art and psychoanalysis, plays, stories and poetry, she has also written ‘Moritz’ by Gerhard Richter. About the horror of seeing the experience of being. Her other publications can be found on www.praxisfls.de.

She lives and works in Cologne